Getting ready to leave Singapore


It has been a tough few days watching my mum deal with her failing health.

Kenneth and Serene have been great hosts. Having wine with Kenneth at the end of a long day of caring for mum has been a real relief.

I leave knowing big brother Charles and my other siblings will do a great job looking after her.

The boys said their good byes to her tonight. I managed to spend quite a few hrs holding her hand while she slept. The memories of all she has done for the Tan family brings a few tears to my eyes and I grab my sunglasses so no one can see my tears.

I believe mum has the strength to get out of this weak spell as her voice is still strong.

I am confident I will have to return in Jan to see her again. She has the sort of fighting spirit that got her to being the mother of 10 kids and 25 grand kids and at least 5 great grand kids.

- Posted using BlogPress from my iPad

I am sitting at the National University Hospital at Kent Ridge in Singapore. My 86 years old mum is beside me on the hospital bed.

She was hospitalized here initially after a fall 1 month ago. The doctors ascertained that she had 2 blood clots and a fracture of her hip. She was transferred to the Rehab hospital after 3 weeks. She had to be moved from the rehab hospital back to NUH after getting a chest infection.

Through out all these issues, the children have been by her side.

Of special note and thanks needs to go to my eldest brother Charles. Charles has been by mum's side for most of this time. He has won my deepest respect and appreciation for all he has done for mum.

Video of big brother patiently getting mum to exercise.

Serene tells me that Charles have been shouted at quite a few times by mum when she has refused to eat and take her medicine.

Brother Lawrence and Wee Seng have been supportive through out the experience both emotionally and financially.

Brother Stewart and sister Rinda both flew down from Australia to take their turns to look after her.

I only managed to fly in with my family on Thursday to take my turn to look after her.

My sister Serene and husband, Kenneth have both spent time looking after her and I am so grateful. Even her daughter Deborah flew back to do her tour of duty.

The nurses here have been great and I am most impressed with the hospital system and facilities.

The difficulty every one is facing is that mum refuses to eat. This has not helped in her recovery.

She even refuses to take her medication , instead shouting at the patient nurses telling them "don't want" in English.

My admiration for the nursing profession grows with each day of difficult caring for my mum who refuses to eat or take her medication.

The change from grand matriarch to now aging and regressing grand mum is having an impact on me emotionally. She now acts like a sultry and disobedient child. I have downloaded some children's games on the iPad so as to keep her occupied.

I even downloaded a mahjong game. That was one of her greatest joys in life. Even that managed to keep her occupied for 10 mins only. Never mind, at least it was 10 mins of mental stimulation.

She could only recognize myself, Annie and niuniu who is Jazton. She could not recognize Tyzton who was quite sad that he had been forgotten.

She is sleeping now. She insisted on going down for a walk after we returned from the lunch walkabout. The hospital is quite good in that you can enjoy restaurants and kopitiams at a few places within walking distance.

The problem is after bringing her down and walking for a 1/2 hr or so, she then insists on going back to the ward as she says she has stomach ache.

This is not helped by her not eating regularly.

Once she is back up at the ward, she asked to go for a walk again and I have to ask the nurses nicely, to help her onto the wheelchair.

So much character and strength was learnt from my mum who brought up her 10 children and countless grand children.

Her pawn tickets still take pride of place on my office wall and is a constant topic of discussion when my client asks me what the pawn tickets are.

Those are the tickets that she received when she had to pawn her jewelry when we were poor. I often remember having to tell the primary and secondary teachers that I did not have the school fees for the month.

And now thanks to her and my various siblings, I have been able to send my sons to one of the best private schools in WA.

I am only staying till Monday and return to Perth knowing my other siblings will continue to look after her in my absence.

Location:Singapore, National University Hospital
Posted by Raymond Tan at 9:05 AM No comments: 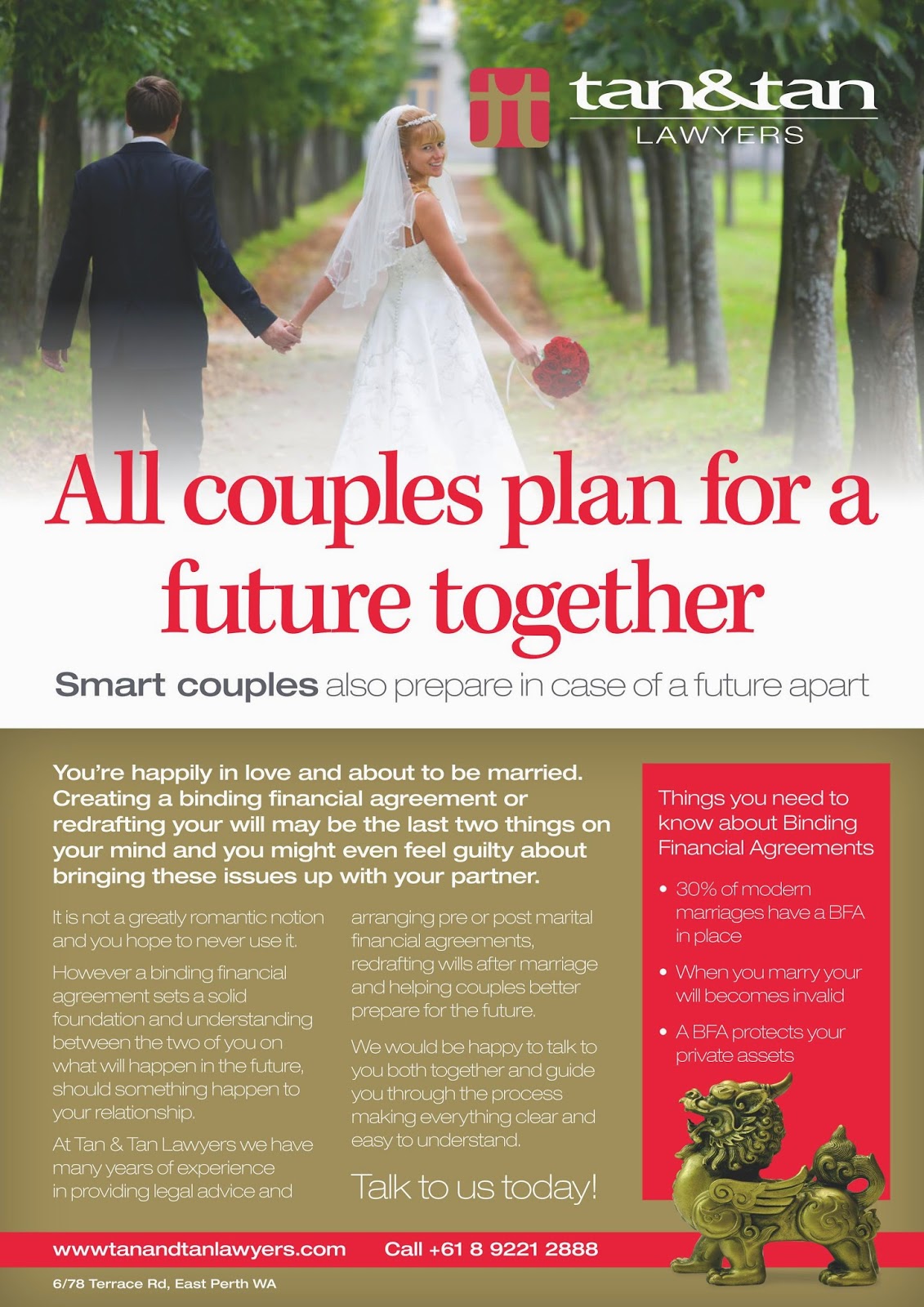 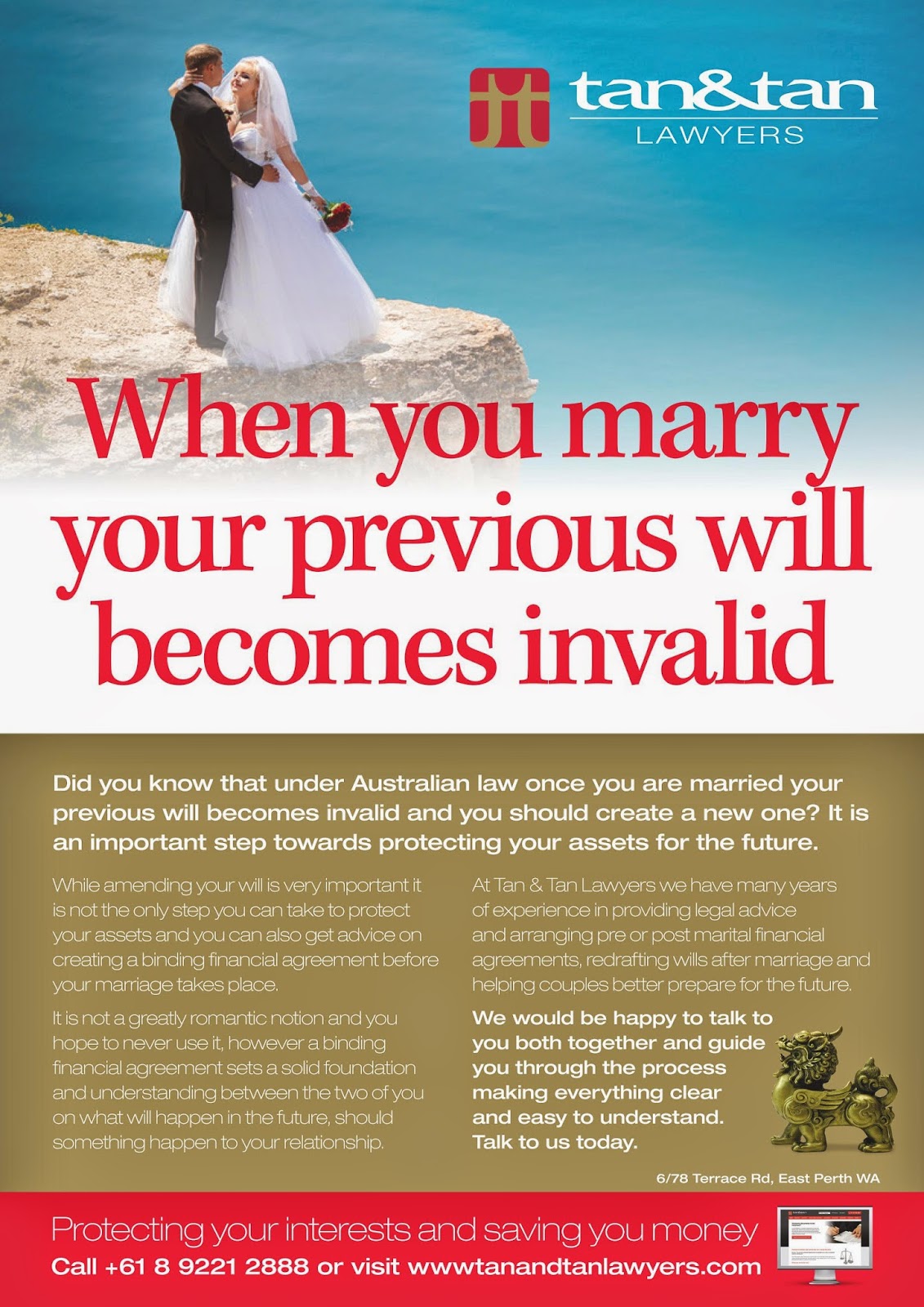 I had a brainwave a few weeks ago. I received an invite to advertise in a bridal magazine. I started thinking about what a bride should be doing before tying the knot.

Well, the first thing is to protect what assets they have. Many brides come from well to do families where the parents have actually given substantial assets to their daughters. How to protect those assets from a greedy grabbing partner. Yes, a binding financial agreement is what is needed. It is essentially a pre nup.

See the ads for more info.

More importantly, a marriage means a new will has to be prepared or your new spouse automatically gets at least half your assets.

Please check with your lawyer if you are getting married.

Posted by Raymond Tan at 9:26 AM No comments:

Videocasting on areas of the law

- Posted using BlogPress from my iPad