WHEN YOUR KID BEATS YOU AT SPORT

A father brings up his child knowing one day , that child will hopefully excel the father in all the father has done. Especially in sports, the father of the child first teaches the child for eg. to swim as a baby. Then the baby grows up and suddenly one day the baby becomes a young boy. The young boy today beat his old man at swimming.

The boy who beat me today was my youngest son Tyzton. He was never easy to teach. Always argumentative and temperamental. Being 2 years younger than his older brother, he was always trying to catch up on motor and sporting skills and comparing himself to Jazton his older brother.

It was a hot day today. When I came back from the office Tyzton kept bugging me to bring him swimming.

I was too lazy as it had been a long day. However Tyzton as always was persistent, which is one trait I always loved about him although it was always a test as to who could wear whom down.

He told me he would swim 10 laps with me?

10 laps? why, in all the times he went to the pool with me, he just wanted to fool around. I have seen him swim a lap at most but it was always after great persuasion.

I decided to humour Tyzton and bring him to the pool. I told him, if he decided after 1 lap that he did not want to swim any more, I would be disappointed.

So there we were, at the Wesley School pool.

At 9 yrs of age, he is a slight figure but muscular for his age. We jumped into the cool water after the hot day.

It was refreshing. I decided to use flippers as I am not a great swimmer. I did 2 laps freestyle and was surprised to see him finishing the laps behind me. And that was without him using flippers.

So I took out my flippers and told him we would swim a lap using breast stroke. We set off and guess what, he kept up with me. I had never seen him swim that well before.

I told Tyzton we would do a lap of free style. It was a real awakening. The moment when you realise your child has grown and learned all you have taught him. The moment you realise that not only has your child learned what he has been taught, he is now doing better than his teacher and father.

He beat me fair and square. And try as I may the next 7 laps, I could not beat him.

The feeling of pride in my youngest son was just so difficult to measure.

As I said earlier, I love sports. I have taught my 2 boys badminton, golf, swimming, tennis, cycling and anything sporty.

Today, I was beaten by my youngest son at swimming. It was a proud moment for me. My son has grown up.

What has that got to do with the law? Nothing, except that perhaps one day, my sons will take over the practice and bring Tan and Tan Lawyers to even greater prominence.

To my son Tyzton, if you read this blog, you will know how proud your dad is today.
Posted by Raymond Tan at 8:05 AM No comments:

It's nearly the end of the weekend. I am preparing a will for a client and thought it might be a good subject for the next blog.

A husband and wife came to see me last week to make a will. They
were from Asia and had 1 son and 1 daughter. They wanted to leave all their properties to their son. They were from a very traditional and old fashion family.

I tried my best to explain that in this day and age, what they were proposing sounded most unfair. I took great pain to explain to them that it was not just the issue of leaving their properties to their son. I told them they had to consider how it would affect the relationship of the son and daughter after their death.

I have seen families broken up as a result of wills that favour different children.

I have acted for a 70 year old mother who had to sue her son because her husband did not make a will and finalise his affairs before his death.

There are lots of problems that can be caused by a failure to plan.

The law also has a set formula for distributing estates where there is no will. That formula may not be how you wish your estate to be distributed.

Failure to plan is tantamount to planning to fail.

So what needs to be considered if you want to make a will.

The first point is to decide who is to be your trustee/executor.

The trustee is then to distribute the estate according to the instructions in the will.

Whom you appoint as the trustee is a very important matter. The trustee has to be someone you trust as they control your assets. They may well sell everything and disappear to the Bahamas.

So choose a trustee that you know will not disappear with your estate.


If you have young children, it is also important to choose a guardian who will agree to look after your children until the children are adults.

After you have decided who is to manage your estate, you have to decide how you wish to distribute your estate.

Do you wish to give everything equally to your children?

When do you wish them to receive their money?

What can the trustee spend your money on while your children are still infants?

What happens if your children and spouse do not survive you. Who gets your millions?

So many questions but it is best to get help as a will is a very important document.

So till the next time, enjoy the blog.
Posted by Raymond Tan at 6:22 AM No comments:

That's the traditional greeting for the Chinese New Year celebrations. We are on to the 4th day of the Chinese New Year. Traditionally, the celebrations lasts for 15 days. In China, a majority of the workers return to their home villages after working away from home for the whole year. The news this year of all the China workers getting caught in bad weather conditions that have prevented them from getting transport home shows how lucky we are.

The Chinese New Year is a time for us to take stock of what we have. Lets count our family blessings and our business related blessings.
Every year, for good luck, I get lion dancers to perform at my office. Here's a picture of one of the lions this year with my boys and their friend Ethan. 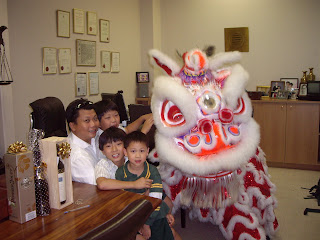 The new year is a good time to consider buying a business.

For those of you who are contemplating going into business or buying a business, I have the following 10 points to consider:

1. Never sign any offers to buy any business until you have received legal advice. The lawyer should help to draft your conditions of purchase that will protect you.
2. Always ensure there is a clause to allow your accountant to check the figures. That makes sure that the business income is as represented by the seller
3. Make a list of all assets that comes with the business. If the photocopier is supposed to be included, make sure it is listed in the schedule.
4. Ensure that you have a clause to allow you to opt out if the lease terms are not favourable. There is no point in buying a business if the lease for the premises is going to expire soon.
5. Ensure that any employees that are going to continue to work with you have all their long service and other leave benefits paid out.
6. Have a clause that allows you to check the business turnover just before you purchase the business.
7. If the business is a franchise, make sure that the contract is subject to your lawyer approving the franchise terms.
8. If you are financing the purchase make sure that you update the vendors regarding the finance approval.
9. Discuss with your accountant what business structure you are going to use. This should be done before you even make any offers.

10. Ensure that you are happy with your settlement date. Will everything be ready by then?

There are many other minor details which can make your purchase a breeze. When in doubt, speak to a lawyer.

Till my next blog. See you and enjoy the rest of the Chinese New Year.

Its the weekend again. My weekends are spent playing badminton and tennis. In the evening, it is usually playing gin rummy with a group of friends.

One counts one's blessing by the friends one have.

I think I have been blessed many folds as I have great friends who provide me with great company and friendship.

If you read Napoleon Hill, his suggestion is that you spend weekends meeting new people to add to your circle of friends so as to increase your business prospects.

I have been spending my weekends with the same group of friends for over 5 years. We play badminton in the day and then gin rummy at night. All the children grew up together. The friendship is tight knit and that keeps the families strong.

I believe one of the reason many spouses split up is because they do not spend quality time together as a family with good friends.

It is not easy getting a group of friends together where the husbands and wifes all share the same mutual hobbies. If the spouses share the same hobbies, the safe bet is that the children enjoy the hobbies too.

I believe one of the reasons many couples split up is because they do not have mutual friends that the husbands and wifes enjoy time with.

So what happens to those marriages? Well the strain sometimes lead to breakups.

The issue is what happens when there is a break up.

Here are 5 things that any couple should think of if the marriage fails:

1. Speak to each other to confirm there is no future in the marriage. You only see a lawyer if there is no other option. If the marriage can be salvaged, it is best to see a counsellor.
2. If the parties agree that the relationship is hopeless, then they need to consider what assets they have and how they wish to split up the assets.
3. Whatever decision is made regarding the assets, the parties should see a lawyer to finalise matters. That is because there may be substantial tax and stamp duty consequences if the matters are properly settled.
4. Agree that despite the relationship ending, the most important concern is the welfare of the children of the marriage. Too much time and money is spent fighting in courts over children because of anger. Those fights do not help the children at all.
5. Prepare a will so that during the time the family matters are being sorted out, if anything happens to either spouse, the wishes of the deceased spouse has been declared.

It is a sad fact that many of Australian marriages fail. It is sadder that lots of these couples spend too much time fighting in court. The only winners are the lawyers. It is better to negotiate a settlement as soon as possible.


However , the first step to take if you feel your marriage is rocky, is to see a counsellor, If that fails, you should see a lawyer for advice.

Goodnight.
Posted by Raymond Tan at 8:55 AM No comments: