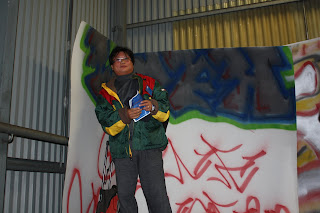 Update on my CEO Sleepout Fundraising

I am ranked 11 on the list of fund raisers compared to the other fund raisers who have had more time to raise funds.


I am  very happy with the support and response received so far. More importantly, the messages of support shows that Perth people have a heart. A heart to help the homeless.


Please keep the donations coming as the homeless need all the help we can give.

Here is a picture of some of the fundraisers in their pyjamas. 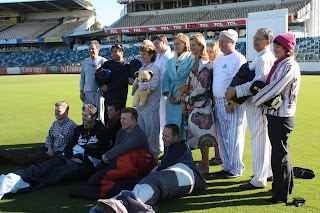 I am thinking of going to the Kathmandu Shop to buy a $900 sleeping bag. Is that cheating??


Will update soon.
Posted by Raymond Tan at 10:32 AM No comments:

As you are aware if you have been following my blog, we have moved to Terrace Rd.

However, I am always reminded of my old office at Wellington St. It has an external toilet. One day, I found a homeless person sleeping there. He would come in after dark and leave the toilet in the morning when the staff arrived. He must have been sleeping there for over 2 weeks until I had no choice but to remove him.

It was emotionally difficult removing the homeless person. I felt much sadness that in this day and age, there are homeless people in Perth which is supposed to be one of the richest state in Australia.

According to The St Vincent de Paul Society website, there are 14,000 homeless people in WA alone.

The Global Financial Crisis has not helped. In my legal practice, I have personally acted for clients who have had their homes repossessed. As the greedy banks continue to raise interest rates, many families are facing real financial challenges.

It is a difficult topic.

The event involves CEO's of companies raising funds by spending a night at the WACA with a sleeping bag and some cardboard paper, rain or not.

Please see my profile below and donate if you wish to help me help the homeless.

I look forward to updating my readers on the event.

The event is on  Thursday, 17 June 2010 and I am starting late. I have 10 days to raise as much funds as possible for the homeless. Please help me and the Vinnies.

Leaving the old office for a new start !

Yes, we did it today. 4th June 2010 was the move from Wellington St to Terrace Rd East Perth. My Feng Shui master, Kieran Ohara advised me that I am to start operations at the new office on 5th June 2010 which is an auspicious day. So, the whole office staff was mobilised to shift everything within a day and to get ready for business tomorrow. It was sad to see the Wellington St office being emptied. It has served Tan and Tan Lawyers well. We have more than doubled the staff during the 7 years we were there. Systems have been improved, staff morale is high and we have a great working team.

We have had lots of staff lunches in the board room. This is a picture of the last board room lunch on 3 June 2010. 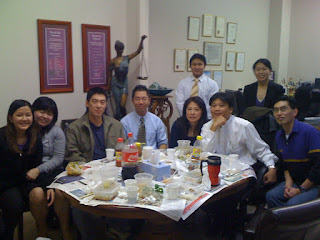 Here's a picture of my wife ("Annie") and I outside the Wellington St office after everything was moved out. 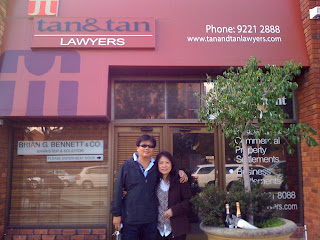 Annie was managing the real estate and settlement business at the rented office next to Tan and Tan Lawyers at Wellington St. It just became too small for the operations. Hence the decision to move to Terrace Rd. It has been a long and torturous road before our final move today.

Negotiations for the purchase of the Terrace Rd office began in Sept 2009. The renovations started in April 2010 and is actually not fully complete yet. A good friend of mine Irwan Lee from Interarch homes did the design and fit out.

The reception desk and some wall panelling has yet to be completed. My conference table which was being repolished got scratched while being delivered yesterday. It will only be returned next week.

Such are the joys and frustration of change. Despite all the hurdles, this is a change for the better and I hope to be able to further improve on the level of legal services provided to our clients. The high tech toilet should be fitted out tomorrow and will be a real treat to use. Here are pictures of the staff and removalist enjoying a lunch break at the park infront of the office today. 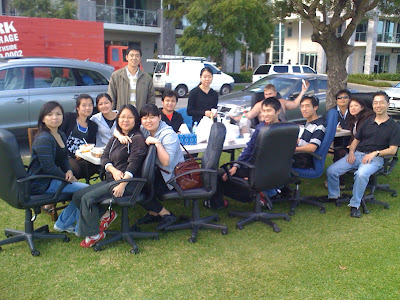 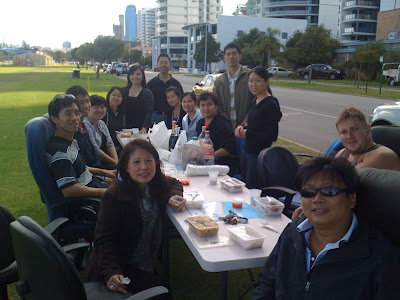 Tomorrow is day one at the Terrace Rd office.
See you there.