Dear Readers If you have been to the Cocos Keeling Islands, you will know what an amazing place it is. I was on the Island for an unfair dismissal case last Tuesday. I acted for the Cocos Island Co-operative  Society ("Co-op") and was instructed by an old friend Ron Grant who is the Co-op's manager. The Co-op is wholly owned by the local residents of the Cocos Island Malay population. The Co-op owns and operates the majority of  businesses on the island including the supermarket, the cafeteria, the stevedoring  etc.  One of the Co-op's employees was sacked after a long history of problems. The Co-op sacked the employee and the employee sued for unfair dismissal. The laws currently on unfair dismissal is governed by the Fair Works Act.
The particular section of the Act is:
385  What is an unfair dismissal
A person has been unfairly dismissed if FWA is satisfied that:
(a)  the person has been dismissed; and
(b)  the dismissal was harsh, unjust or unreasonable; and
(c)  the dismissal was not consistent with the Small Business Fair Dismissal Code; and
(d)  the dismissal was not a case of genuine redundancy.
Note:     For the definition of consistent with the Small Business Fair Dismissal Code: see section 388.
387  Criteria for considering harshness etc.
In considering whether it is satisfied that a dismissal was harsh, unjust or unreasonable, FWA must take into account:
(a)  whether there was a valid reason for the dismissal related to the person’s capacity or conduct (including its effect on the safety and welfare of other employees); and
(b)  whether the person was notified of that reason; and
(c)  whether the person was given an opportunity to respond to any reason related to the capacity or conduct of the person; and
(d)  any unreasonable refusal by the employer to allow the person to have a support person present to assist at any discussions relating to dismissal; and
(e)  if the dismissal related to unsatisfactory performance by the person—whether the person had been warned about that unsatisfactory performance before the dismissal; and
(f)  the degree to which the size of the employer’s enterprise would be likely to impact on the procedures followed in effecting the dismissal; and
(g)  the degree to which the absence of dedicated human resource management specialists or expertise in the enterprise would be likely to impact on the procedures followed in effecting the dismissal; and
(h)  any other matters that FWA considers relevant.
Therefore my advice is that any employer who wishes to terminate an employee need to make sure that proper warning is given before termination. An oppurtunity to improve should also be given. Written warnings should be given as much as possible.
Once I landed on the island, it became a case of getting my witness statements in order. I finally managed to  get them done after chasing up the witnesses for 2 days.
The trial started on Friday and the first thing the Arbitrator, Deputy President McCarthy did was to get the parties to mediate. We spent 3 hrs before being  able to settle the matter out of court. It was a shame in a way as I was geared up to tear into the sacked employee to show he had deserved the sacking. Be that as it may, it is always better to settle a matter out of court as it gives finality so that no appeals are made.
An interesting aspect of the Fair Works Act is the issue of cost.
A person involved in an unfair dismissal case before Fair Work Australia must             meet their own costs. Fair Work Australia may order a person to bear some or all of the costs of another person if the unfair dismissal application or response to it: In certain circumstances, Fair Work Australia may also make a costs order against a lawyer or paid agent representing a party in an unfair dismissal case. The circumstances mentioned are where a party pursues a case when there is no chance of winning just to put pressure on the employer etc. Well, I finished the case and there was some spare time before my flight back to Perth. There is a golf club on the island. I joined the members for a game and it was a refreshing change from the staid rules of most golf clubs. Here, the players were able to play with sandals or barefoot. The idea was to get out there and enjoy yourself. The game was based on best 4 balls and I was glad to assist my team to win with several good chips. Here are some photos of the members and the club which includes a few holes that runs across or along the airport runway. 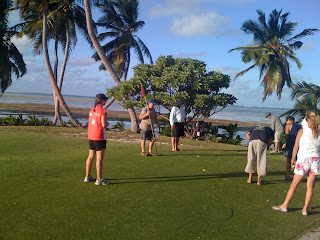 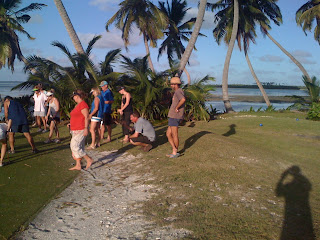 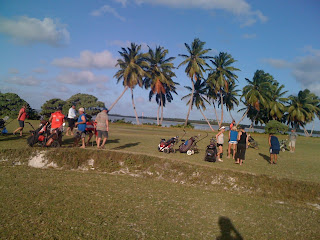 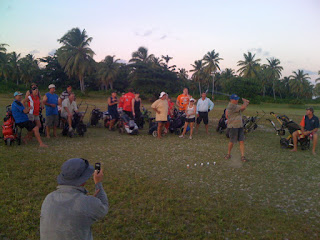 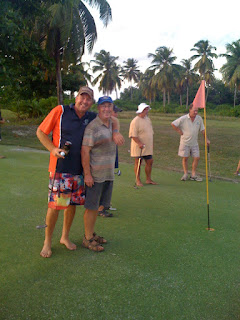 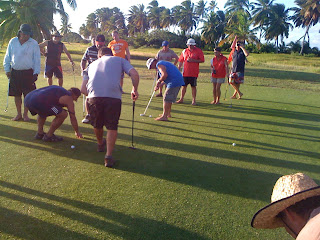 Other than golf, I also managed to squeeze in some fishing. I managed to get a tuna and 2 barracudas. The tuna I had for lunch. However the barracuda was either thrown back to the sea or used as bait. The Cocos Malays are so spoilt for fresh sea food that barracudas are not good enough for the dinner table. 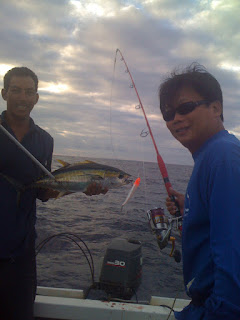 Pak Ayub my guide also caught a shark. That again was thrown back as it was deemed not good enough for the table. I would like to thank Pak Ayub and Ossi for a great time. 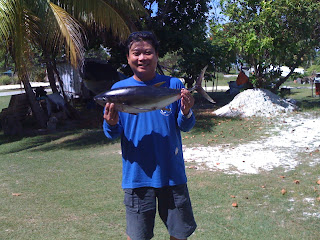 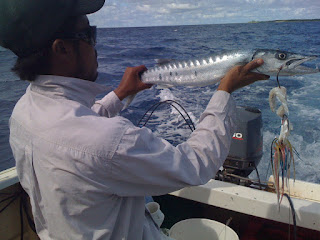 I would also like to thank Ron and Marias for looking after me during the trip. It was also great to have caught up with Gordon Thomson, a well known Christmas Island Union activist and Alan Medous  who is one of the leaders of the Malay community on the Island. 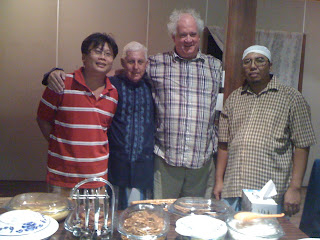 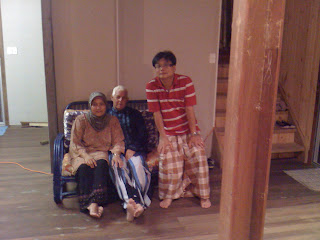