Things that can go wrong when Associations are not managed properly


The summary of the case is as follows:

One of the founding member was Sheng Chin Lai (the “Plaintiff”) in SUPREME COURT OF WESTERN AUSTRALIA action Lai v Tiao (No. 2 (2009) WASC 22.

In 1995, Lai donated over $250,000 to the Association to purchase Lot 42 Warton Road, Canning Vale, Canningvale with the aspiration that a Tao Centre temple would be constructed on the land, and eventually, homes built for the elderly in its vast compounds.

The other founding members were Cheng Chih Tiao, Hui Ping Wang (both known as the First defendants in this case), Yun Sen Chou, Ho Ming Wang and Song Tyan Kuo.
With the donations from over 200 donors and well wishers, a temple was constructed and completed in March 1996 with a grand opening ceremony.

The list of of over 200 contributors is engraved on a marble plaque which is placed at the temple.

In April 1996, there was a meeting between the 6 original contributors, ie Lai and Chou, Ho Ming Wang and the 1st and 2nd defendant and finally Kuo. There was a huge disagreement between the 6 original contributors regarding how the temple should be operated. Lai and Chou decided to make things easier for all concerned by refraining from further involvement in the temple.

Ho Ming Wang died in 2001, and the First defendants, Tiao & Wang took total control of the association and its funds.

On 11 May 2004 Tiao signed a contract to sell part of the temple land to Level Holdings Pty Ltd (“Level”). According to the contract, in return for developing the land into ten lots, Level will keep 5 lots and the Association was to keep the other 5 lots.

Tiao signed the contract, using his personal address and without the Association’s seal.

By sheer chance, Lai discovered that the land was being developed in Jan 2005 and immediately instructed Tan and Tan Lawyers to lodge a caveat to protect the interest of the Association.

On 17 Jan 2005 and 1 Feb 2005, Lai through Tan and Tan Lawyers demanded from Tiao all information regarding the contract with Level as Lai suspected no authorisation had ever been sought by Tiao from the members.

Instead of responding to the question as to whether he was authorised to sell the land, Tiao signed up 38 new members, who comprises some of his family and friends. He now claimed they are the new members of the Association.

He then organised the 1st ever AGM of the Association on 26 Feb 2005 and convinced the “new members” to pass resolutions to:

1. Approve the development of the land to raise infrastructure funds for the Association.

2. Ratify all past acts, deeds, transactions and omissions of whatever nature of each of the officeholders.

When Lai finds out about the 1st ever AGM and the resolutions that were passed, Tan and Tan Lawyers went to the Supreme Court and obtained an injunction against the land being transferred to Level.

By this time the land was worth, conservatively, at $1.8million.

The injunction was granted on 19 Apr 2005. At the injunction hearing, it became clear that the Association had never maintained a list of members, from 1992 until the issue was raised on 10 January 2005 by Tan and Tan Lawyers. There was therefore no authorisations obtained from any members regarding the land sale to Level Holdings.

At this point, it was also revealed that no accounts were ever maintained by Tiao in that time. It also appeared that the Association’s funds were merged with Tiao’s personal accounts.

For the next two years numerous interim applications and injunctions were lodged and fought by the parties until the final hearing which was heard on 19 Nov 2007 for 6 days.

The hearing centred around :

(i) Who is supposed to be a member of the Association as Tiao never kept any list of members or proper accounts from 1992? (ii) whether the selling of the land was authorised.

None of the donors who contributed towards the temple building funds were consulted on the sale of the land as Tiao insisted they are not members and had no interest in the Association.

Lai was of the opinion that all persons who had contributed towards the Temple construction should be accepted as legitimate members.

(ii) Was Tiao authorised to sign the Level Holdings land contract? The decision of who is a member was crucial to the answer.

(i) All persons who had initially contributed towards the temple construction and whose names are listed in the temple plaque are the rightful members of the Association.

(ii) That the meeting on 26 Feb 2005 where the 38 members were signed up by Tiao were invalid. Therefore the resolutions passed to ratify the actions of Tiao and the decision to continue with the sale of the land to Level Holdings are invalid.

(iii) The Judge found that Tiao operated the temple like his own “fiefdom” disregarding the interest of the persons who should be the rightful members.
Quote from Justice Johnson:

“In my opinion, at all times the first defendants (“Tiao and Wang”) have acted out of self interest and not in the interests of the Association and it’s membership. Over time, Tiao has adopted the approach that it is his perogrative to decide what is in the best interests of the Association. He either has no grasp of the concepts of separate corporate identity or chose to disregard the distinction between his view and that of the Association which would normally be identified by the resolutions passed by members at general meetings.

This is best illustrated by his decision to enter into the Level Holdings contract without raising the matter at a validly convened board meeting with notice given to all board members before putting the matter before the members of the Association at a validly convened general meeting. Such steps were required of Tiao but, in my view, he deliberately declined to take them”.

(iv) The Judge also found that Tiao had mixed his personal funds with the Association’s funds.

(v) The Judge declared that the contract to sell the land to Level Holdings was unauthorised.

(vi) The Judge also declared that Conal OToole and his counsel P McGowan, were not validly authorised by the Association to represent the interest of the Association.

The Judge has now ordered that there be a meeting as soon as possible by all members who are listed in the temple plaque to decide what they want to do to resolve the issues faced by the Association.

The Association continues to be represented by Mr Raymond Tan of Tan and Tan Lawyers while Ken Robson acted as counsel.

All members whose names appear in the plaque located at the Association’s premises are encouraged to contact Mr Raymond Tan to register their interest in the forthcoming Special General Meeting.

This is a picture of the plaque at the temple. 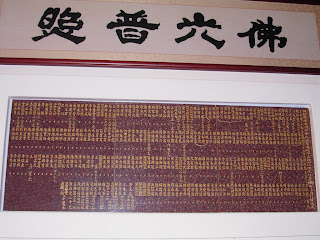 A copy of the full Judgement can be found at :