Yes, I managed to survive the 2011 CEO Sleepout.

The toughest part was the hunger and cold. I did not have a chance to get a good meal before registering for the night. 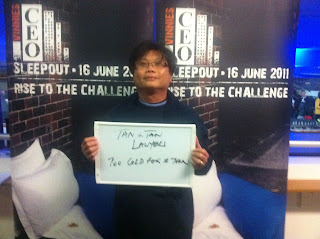 Instead of lamb shanks like last year, I had a real soup and roll.

The company was great and I managed to meet  the WA Governor Designate Malcolm Mccusker and his wife Tonya. 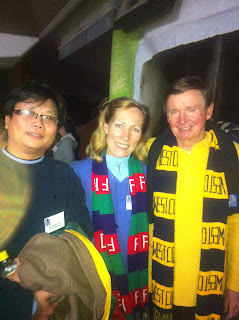 At 11 pm. Steve Farano and I decided we had to find a place to bunk down. We decided to bunk at the same place I slept in last year. It was more fun with company this time. 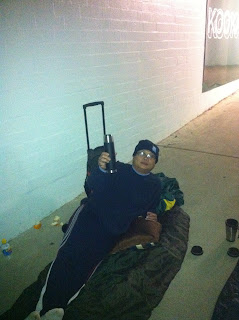 The night was cold but at  least it did not rain. Steve and I got up at 630 am and went to have breakfast with the other CEOs  before walking home.
I managed to stay No. 4 in the list of fundraisers. The final amount raised by myself was $18,350 with a $2000 donation from a charity organised by Andrew Forrest. He actually donated $2000 to each of the 107 participants. That means I was ranked No. 5 but I take my hat off to Andrew Forrest for his generosity and his PR  move.

There was some disappointment that not all the participants worked hard enough to raise funds. I was disappointed that Eric Ripper, the State Leader of the opposition only raised $150 plus $2000 from Forrest. A few other politicians were at the bottom rung of fund raisers.

Thanks to all of you for your generosity. Every dollar donated was appreciated.

You have all showed that WA cares.

For those who forgot to donate, you can still do so till the next week.

I certainly will take part again next year and try to beat my current record. Till next year, keep warm and sleep well.
Posted by Raymond Tan at 7:03 AM