The demise of the other Tan of Tan and Tan Lawyers 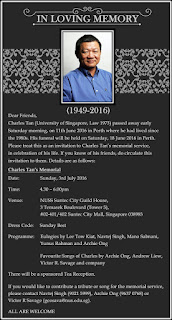 Last Sat was an emotional day for me as I laid my brother Charles Tan to rest.

Charles was the other Tan in Tan and Tan Lawyers.

He is survived by his wife Cynthia and 3 children, my mum and 9 other siblings. His has been a tough life but he has always been a good brother to all his other siblings.
He earned my biggest respect by the way he spent time last year looking after my mum who is also not well.

Many of the siblings and nephews and nieces celebrated his life at my youngest sis's home after the funeral. It was a good night which Charles would have enjoyed too.

This is my eulogy:

I would like to thank all of you who have come here to celebrate Charles’s life. We are here as we have shared the experience of having known my brother Charles Tan as either a sibling, a relative, a golfing kaki, a friend and even as a client.

Charles, my dearest brother whom I call Koko is the eldest boy in a family of 10 children.
If you compare his size to the rest of the brothers, you will note that he was the shortest in height but he had the biggest heart.

I have always said that he was the shortest one amongst the siblings as he sacrificed what was on the dinner table for the other siblings.

As the eldest in the family, I recall that he had to work in the shipyards in Singapore to help the family finances. That must have been tough as he often told me how very early he had to wake up every day to get to work.

I remember moving in with him when he rented a bungalow within the Seletar Air Base in Singapore.  We lived at the Seletar Air base for quite a few years while I was studying my A Levels in night class.

Koko was by then a lawyer and I remember listening and discussing his legal cases with me. That inspired me to learn the law. So even at 16 years of age, I knew I wanted to be a lawyer just like big brother.

I will never forget sharing the house at Seletar Air Base. That was the first time I was away from mum and dad. But I was safe as we were together.

In fact that was the time he started dating his wife Cynthia. That means that I must have known Cynthia for almost as long as Koko had known her.

In fact just yesterday Cynthia reminded me of how Charles and I used to  take walks to buy indian vadais from a shop within the air base.

When I went to England to study, it was through the help of Koko and the rest of the siblings.
Koko and I would write to each other regularly. Of course during that time, there was no such things as skype or email.

Occasionally we would have a phone call to him from England. A telephone call from England to Singapore or Australia was such a luxury and the conversations were always short and to the point so as to save money.

Unfortunately, for me, I still carry that experience with me and my wife sometimes says I am always too short and curt when talking on the phone.

It is no secret that most of the siblings who migrated to Perth did so because of Koko.
Koko was a real trailblazer for the Tan family.

He migrated to Perth more than 40 years ago when Perth was a real backwater town.
He was one of maybe 2 or 3 Chinese lawyers who had the courage and the determination to start a legal practice in WA.

It was a period of racial discrimination against the Asians and yet he found the courage and the skill set to establish his practice of Charles Tan and Co.
His client base at that time consisted of many who did not have the language skills to defend or protect themselves.

He did many criminal cases that were reported and which brought him closer to the Asian community. He championed the Asians who were being discriminated during that period.
Many of his oldest clients and friends are in this room today. Papalia, Maggie, Daisy and Wayne all remind me of the Mint House days where he had his practice as Charles Tan and Co.

In the 1990s, Charles and I registered Tan and Tan Lawyers. Charles headed the practice. He handed the reins to me in July 2003.

There was a period of time where we went our separate ways because of a difference in opinion, However we were able to settle our differences as brothers.

Whatever differences we had over the practice of law was reconciled by the fact that we shared the same beliefs in family and the caring of our parents.

Our mother who is still alive in Singapore was diagnosed with dementia quite a few years ago.
Koko went above and beyond the call of duty in flying back to Singapore on many occasions to help look after mum.

I must also say my thanks yous to my other brothers and sisters in Singapore who have continued to care for our mum especially Lawrence and his wife Irene and daughters.

I will always treasure and respect Koko for the time he took to look after mum. I know mum never said it, but she always favoured Koko as he helped the family while working at the shipyard and was a contributing breadwinner for our big family of 10.

Koko leaves behind a loving wife, Cynthia who stood beside him through everything that God threw at them.

I have seen how Cynthia did everything to ensure Koko was as comfortable as possible so as to give him the dignity to endure his last few months on earth fighting cancer.

He leaves behind also his beloved son Timothy and daughters Vicky and Liz.

I would like to just quickly read some portions of emails sent by some of Koko’s friends:
Kevin De sousa: a fellow lawyer:
“Although I did not work with Charles at Tan & Tan Lawyers, I often would call him up to ask for his guidance in criminal law matters.  On several occasions, we went out drinking during the days when I was at Tan & Tan Lawyers. We would talk about his days in Singapore, how he started his legal practice in Perth, how he smashed his car into a home at Wanneroo Road after a drinking session,  how he got his Singapore drug smuggling client acquitted in his early days of practice in Perth which led him to being known among the Asian community, why he migrated to Perth, his articles for the newspaper in Singapore, his satay machine and business etc.
Charles was always fascinating with his stories and I will always remember him as a very helpful and humble person and a lawyer who had a great passion and learning for the law.”

Minnie Seth, an old client of Charles: “I was privileged to have had him as my solicitor when I was starting out on my career and will always remember his calm and kind way in which he handled every  problem that drifted into my conveyancing world and reassured that there was nothing to worry about. God rest his soul in peace. I will always remember him as a decent, kind and good man”.

Teo Soh Lung, a fellow lawyer and my master in Singapore:
“Yes, Charles had been with Teo Lai & Lee ever since it was formed. We sought his advice and his experience in criminal legal aid in Australia when we set out mind to form such a scheme. He was always helpful and supportive of the wild plans we have. And he was a great criminal lawyer”.
Kee Yong Yee:  “He had a strong conviction for justice and he was a strong fighter against racial  discrimination. It is so sad that he left this world so early. “

On behalf of Cynthia and her children and the Tan family, thank you for coming today to celebrate Charles’s life.

Lastly I end with a simple quote from Terry Pratchett, an English author.
“Do you not know that a man is not dead while his name is still spoken?” ― Terry Pratchett

I am sure Charles’s name will continue to be spoken by all of us.
Raymond

Thanks for the informative blog..David Dribbin & Michael Brown have a combined experience in excess of 40 years.
They direct an enthusiastic team of lawyers from their Geelong office that regularly attend the Geelong Magistrates Court.
We can help you navigate
through the pitfalls associated with being charged with any law offence.
Criminal Lawyers Geelong